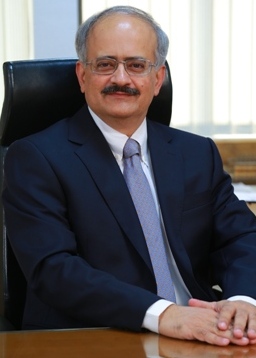 Mr. Vipin Sondhi, is an alumnus of The Indian Institute of Management, Ahmedabad, The Indian Institute of Technology, New Delhi, and did his schooling at The Lawrence School, Sanawar. Mr.Sondhi has over three decades of experience in Manufacturing and Engineering based companies such as Ashok Leyland, JCB India , Shriram Honda, Tata Steel and Tecumseh Products India, of which over two decades was as MD & CEO. He a strong and proven track record as a leader, and is a passionate hands-on professional.
Mr. Vipin Sondhi was the MD & CEO of Ashok Leyland and a Director on the Board of Switch Mobility, a fully owned subsidiary of Ashok Leyland set up to manufacture Electric Vehicles. Ashok Leyland is the 2nd largest manufacturer of commercial vehicles in India with an international footprint. Prior to Ashok Leyland, he was MD & CEO of JCB lndia for over 13 years, and was a member of JCB’s global executive team. He led the JCB business, into five world class manufacturing plants situated in three locations, and established market leadership in the Construction Equipment Industry. JCB’s Made in India products were exported to over 100 countries cumulatively during his tenure. He also also a member of JCB’s Global Group Executive and also had charge of S.E.Asia and the Pacific. He was appointed by the Government of India as the Chairperson of the Board of Governors of the Indian Institute of Science Education and Research (IISER), Bhopal in December 2015. He has held the position of Vice President of the Society of Indian Automotive Manufacturers (SIAM) and Vice President of the Automotive Skill Development Council (ASDC). A member of the Confederation of Indian Industry’s (CII) National Council, he is also the Chairman of CII’s National Mission on Technology, Innovation & Research and Chairman of CII’s National Committee on Future Mobility. He serves on the Board of Trustees (BoT) of the Bharatiya Yuva Shakti Trust; the BoT of The Ananta Centre and the BoT of the Sasakawa India Leprosy Foundation. He was awarded the Confederation of India (CII) Young Manager’s Trophy in the year 2000; The Udyog Rattan Award by the Institute of Economic Studies in 2011; The CEO of the Year Award at CEO India Awards in 2014. He was also conferred with an Honorary Fellowship by the Centre for Excellence in Project Management (CEPM) in 2017 and The Economic Times ‘Most Promising Business Leader of Asia - Construction Equipment Industry in 2018-19.